(Located on Aladdin Road about 1 mile north of Highway 20) 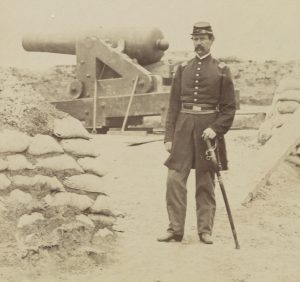 Genealogy can sometimes produce a great “who dunnit.” Stevens County auditor’s records have been an indexing/scanning project of the Northeast Washington Genealogical Society for many years. Over the winter of 2015, a couple of shining stars emerged that had been waiting for us to find.

Amongst the neat little boxes tied with cotton string was a letter to the Stevens County Commissioners asking them to appropriate funds and issue a warrant to D. J. Zent for a burial plot at Evergreen Cemetery for all old veterans (dated April 13, 1899, Colville, Washington). He states: “As a veteran of the late war I with others have had the care during the sickness and death of George B. Williams an ex-soldier of the Civil War and a member of the 12th Michigan Cavalry – and after his death I contracted for a lot in the cemetery near Colville known as the Evergreen Cemetery agreeing to pay therefore – The lot contains room for 20 graves – and the price to be paid is ten ($10) dollars.”

Further research shows the commissioners approved the appropriation and issued a warrant at the next Commissioners meeting in April, 1899, thereby the County owned the plot for old soldiers to be buried in. Evergreen Cemetery has many unmarked graves but George B. Williams was not listed in our enumeration of the interments. After 18 months of extensive research, we are no closer to identifying George B. Williams other than to say he served and is buried at Evergreen Cemetery. The research also unearthed three other men who are Civil War Veterans with grave sites of unknown location. These veterans are William Aldridge, Dennis Huntley, Jr and James (Benjamin) Moore.