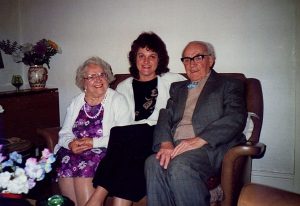 Kathy and her 2nd cousins, once removed in England.

In today’s “Meet the Board” series, we’re introducing you to Kathy Sizer. Kathy lives in Granger (Yakima County) and is WSGS’s Membership Chair. She has been a member of the WSGS since 2011. She is also a member of the Yakima Valley Genealogical Society where she has been president, vice president and hospitality chair.

Kathleen Louise was born in Oakland, California in 1951 to August Edward and Vivian Jane (Washburn) Weedle. Her mother liked the name Kathleen (as did approximately one million other mothers at the time), but when she told her husband, he said he did too as his former fiance’s name was Kathleen. Horrified, Kathy’s mother said they needed to pick another name, to which her husband replied, “I didn’t marry her. I married YOU, didn’t I?” Years later, Kathy’s mother met Kathleen and they became good friends until Kathleen died of cancer.

Kathy’s interest in genealogy began when her grandmother Edith Clarke Washburn and her sister Alice Ramos Clarke were discussing family history when Kathy was in the 4th grade. That discussion sparked Kathy’s interest. Later, after college, Kathy found a handwritten family history her grandmother had done and that really secured her lifelong passion. 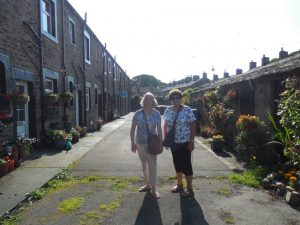 Kathy with her cousin Diana Walcom at their great grandfather John Clarkes’ home in Gargrave England. 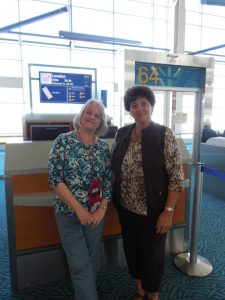 Kathy and cousin Diana Walcom in England during Diana’s first trip to see the family home.

Even though her DNA ancestry says she’s only 36 percent English, Kathy’s ancestors come from England, Germany, Switzerland, the Netherlands, Scotland, and Ireland. She has been lucky enough to travel to England and Scotland to see where her grandmother’s family was from. She’s also got Polynesian ancestry on her mother’s side, but is still searching for that ancestor. A genealogist’s work is never done!

Kathy has quite a few interesting characters in her ancestry. She had a distant grandmother in Salem who was imprisoned for witchcraft, but released when the community began to realize the awful practice of imprisoning (or worse) was wrong. Kathy also has a great grandmother who was governess to Louis Comfort Tiffany, the famous glass maker. And what about John Billington, her distant grandfather, who came over on the Mayflower and was the first man in the Plymouth Colony to hang for killing a man? True story.

When not searching for her ancestors, Kathy enjoys gardening, travel and reading. She and her husband, who sometimes calls her “Louie,” have four grown children and seven grandchildren. Two of their sons are adopted from India.

Now you know a little more about another of the WSGS Board members. The next time you see Kathy say hello and thank her for her service to WSGS.