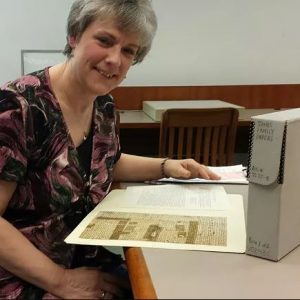 In today’s “Meet the Board” series, we’re introducing you to Karin Coppernoll. Karin lives in Monroe (Snohomish County) and is in her first term as WSGS’s Secretary. She is a professional genealogist, managing her own genealogical research firm “Brick By Brick Genealogy.” She has a certificate in Genealogical Research from Boston University and has attended the Salt Lake City Institute of Genealogy and completed a course in Advanced Research Tools: Land Records by Richard G. Sayre and Pamela Boyer Sayre. She is a member of the Association of Professional Genealogists, the National Genealogical Society, and the New York Genealogical and Biographical Society.

Karin and her husband James “Jim” Coppernoll have been married 31 years. They have two children: son Clint (age 25) and daughter Camille (age 17). In addition to working as a professional genealogist, Karin is the bookkeeper for her husband’s environmental geology corporation. In her “former life,” Karin was a “jill-of-all-trades,” working for Jackson County (Oregon) Environmental Health Department, a water testing lab, a temporary job agency and an accounting firm. She’s also worked as a veterinary technician, children’s pastor and taught Latin at an alternative high school.

While having quite a varied work history over the years, one constant has been genealogy which she started at age 12 when she took a genealogy and heraldry class in middle school. After that, she was hooked! She is particularly proud of the deep New England ties of her four grandparents.

Now you know a little more about another of the WSGS Board members. The next time you see Karin say hello and thank her for her service to WSGS.