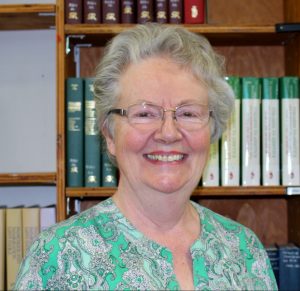 In today’s “Meet the Board” series, we’re introducing you to Janet McKinnon from Richland (Benton County). You might recognize the McKinnon name — she and her husband Mikal (Immediate Past President of WSGS) have been active in WSGS business for many years. Currently, Janet is WSGS’s Region 6 Representative for Adams, Asotin, Benton, Columbia, Franklin, Garfield, Walla Walla and Whitman Counties. Janet’s also a proud member of the Tri-City Genealogical Society where she has served as vice president and program chair. And if that’s not enough, she’s been the Librarian at the Richland Family History Center since 2000, helping patrons with their genealogy research. No wonder she was named a Washington State Genealogical Society Outstanding Volunteer in 2012! 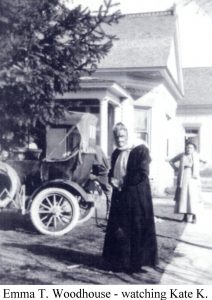 Janet’s Grandmother Kate (on the right) watching her mother Emma get a picture taken next to a new car. Emma walked across the Mormon / Oregon Trail as a 13-year-old girl. 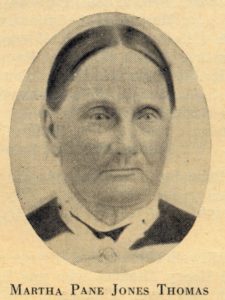 Janet’s 2x great grandmother (mother of Emma). This is the earliest female ancestor that Janet has a picture of.

It all began when little Janet Lemon was born in Coleville, Utah, the first of four children (and only daughter) of Karl and Bessie (Kirkham) Lemon. She was named after her mother’s middle name. Janet graduated from North Cache High School (Utah) in 1961 and entered the Utah State University that fall. On December 18, 1964, Janet married her partner for eternity Mikal A. McKinnon in the Logan temple. After their graduation from USU, the couple moved to California, then to Washington in 1975. 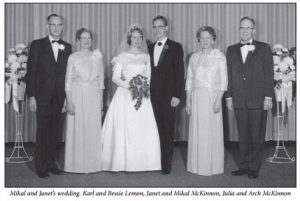 Janet and Mikal are the parents of five children: four sons and a daughter. Their Down Syndrome son lives with them. They’re also the loving grandparents of 13 from a 10-year-old Boy Scout to a college graduate granddaughter.

Janet’s interest in genealogy started with her mother and her family. While Janet’s mother didn’t do formal research, she loved and valued her ancestors. Her father (Janet’s grandfather) pioneered areas of genealogy for the Genealogical Society of Utah. He and other family members did the research and shared it. Janet’s mother shared the stories that she heard first hand from the pioneer generation, and passed those stories on to Janet. Even today, Janet’s greatest interest is in family stories, photos, memories and sharing them.

Janet uses FamilySearch.org for much of her research, especially for her early American and English ancestors. One of her most interesting genealogical finds was a Civil War record for the son of a “Dependent Mother” listed in the pension books.

Now you know a little more about another of the WSGS Board members. The next time you see Janet, say hello and thank her for her service to WSGS.