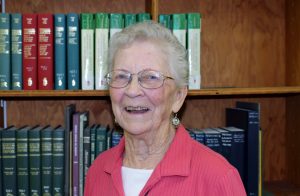 In today’s “Meet the Board” series, we’re introducing you to Opal Myhres. Opal lives in Yakima and is WSGS’s Region 5 Representative for Kittitas, Klickitat and Yakima Counties. She is a proud member of the Yakima Valley Genealogical Society where she has been president, secretary and treasurer. She is currently the head librarian of YVGS’s amazing research library located at 1901 S. 12th Street in Union Gap. Between the 18,000+ bound volumes on the shelves and the massive microfilm/microfiche collection, the library hosts an equivalent collection of 35,000 volumes of genealogical research material covering all 50 states and a large number of foreign countries. Quite a job to be the head librarian! 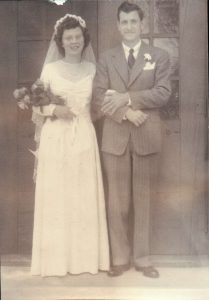 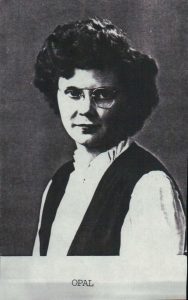 Opal Irene Walsh was born in October 8, 1927 in northern Minnesota. Her parents Charles and Ethel (Olson) Walsh named their first daughter after October’s birthstone – the opal. She was the oldest girl in a family of five boys and three girls. After graduating high school in 1945, Opal married her sweetheart Louis Myhres in 1946 as soon as he got home from the Navy after the war. Not long after, the couple moved to Washington where Louis’s family lived. Opal was a stay-at-home Mom to their two children until Louis was diagnosed with Multiple Sclerosis. When Louis went back to school, Opal went to work for Sears until 1974 when he had to retire. But they soon bought a motorhome, and with Opal as the driver, they hit the road. Louis passed away in 1984 while they were snow-birding in Arizona.

In addition to her two children, Opal is the proud grandmother of three granddaughters – and 12 great-grandchildren, ages 23 to 3.

Opal’s interest in genealogy started early. Her father had always told the family that there was a family Bible that traced his mother’s family back to early England. It was passed down from the youngest son to the youngest son. When Opal and Louis lived in Olympia, she located the son who should have had the Bible who was living in the Seattle area. He told Opal the book was too fragile to send, but there was a book with the same info in the Seattle Library. What an amazing find! Opal copied it, and later found one to purchase. The book outlined the family lineage from England to Massachusetts from 1635, through the generations of Opal’s paternal line — the George Weekes family. Opal’s father also knew that his family came from Washington County, NY and his father was the youngest of 14, born in 1848. Opal went to the Olympia library and met Alma Greenwood, former WSGS president, who showed her how to order a census and how to find him. From those two experiences, Opal was able to fill in details about many members of her family – and become “hooked” on genealogy.

Besides being a member of the Washington State Genealogical Society since 2002 (and a WSGS Outstanding Volunteer in 2005), Opal belongs to the Daughters of the American Revolution (DAR) where she is the state Archivist; the Daughters of the American Colonists, Descendants of Washington’s Army at Valley Forge, and Sons of Norway. She is also a former member of the Colonial Dames.

When she’s not researching her family roots, Opal enjoys quilting, embroidery and reading.

Now you know a little more about another of the WSGS Board members. The next time you see Opal, say hello and thank her for her service to WSGS.