Attention! That’s military talk for listen up! And that’s what we did during keynote speaker Michael Strauss’s presentations. Entertaining, energetic, informative — everything from the Colonial Wars through WWII. All three sessions kept us rapt with “attention!”

An always super fun activity at the conference is the “Dress Like Your Ancestor Day.” It was so fun to see attendees dressed as their Salem Witch ancestor (complete with noose), Colonial dame (watch out for that hoop skirt!), Norwegian (or German or New England or Irish or…other parts of the globe) ancestor. We all love to talk about our ancestors and today it was so fun to see them walking around the conference.

My two “extra” classes today were Sara Cochran’s “Irish Eyes Are Smiling: Finding Vital Records in the Land of Sain” and “Motive, Means and Opportunity: The Sad Saga of George Richards” with Jean Hibben. I’d never taken a workshop with their instructor, but will in the future. Great information and presentations!

Ahoy, maties! The evening closed with the annual banquet at the Gleneagle Golf Course. The always entertaining Daniel Earl kept us laughing all through his presentation on pirates. Yes, pirates! Who would have known how piracy affected our ancestors!

Tomorrow’s the last day of the conference, but a full one. Looking forward to hearing Thomas MacEntee — via video conference. Unfortunately, Thomas was unable to fly to the conference, but being the professional that he is, conference organizers arranged to have him live through the wonders of technology.

You could feel the excitement and energy in the building as more than 250 genealogy enthusiasts gathered at the Byrnes Performing Arts Center for the first full day of the 2019 Northwest Genealogy Conference.

Our keynote speaker was the amazing Angie Bush. Angie is a senior genealogist with Ancestry ProGenealogists. She’s also one of my favorite DNA speakers. She uses clear language, great examples and case studies and really keeps up on the ever-changing world of DNA.

Angie’s presentations today included Direct Line Testing (Y-DNA & mtDNA), Answering Genealogical Questions with Autosomal DNA and Power Tools to Make the Most of Your DNA Test. I had many “ah ha’s” to take home to apply to my own DNA results. Lots of notes scribbled on my syllabus.

In addition to the three keynote presentations, the conference attendees had to make the difficult choice of choosing just two workshops from the ten offered. I opted for Janice Lovelace’s “Becoming Washington: Who Came to the Northwest and Why” and “The Genealogical Proof Standard According to Sherlock Holmes” with Jill Morelli. Both classes were standing room only — more chairs brought in to Janice’s Washington class and Jill’s Sherlock Holmes class was moved to a bigger classroom.

I had a chance to visit a few vendors — interesting! Will buy raffle tickets and visit the Heritage Quest Research Library book store tomorrow.

Speaking of tomorrow…great fun is in store! It’s “Dress Like Your Ancestor” day! You can still register for the day. Doors open at 7:30 a.m. We’re waiting for you!

The Northwest Genealogy Conference is one of the region’s best learning and networking opportunities. I look forward to it all year and today didn’t disappoint! In case you hadn’t heard, the conference, in its sixth year, is August 14 – 17, 2019, at the Byrnes Performing Arts Center at Arlington High School.

The afternoon began for many taking advantage of Janet O’Conor Camarata’s free beginning class. I saw more than beginners in the class — there’s always something new to learn or relearn in the world of genealogy. There were also three “advanced workshops” offered: Connecting DNA Matches with Angie Bush, Family History Writing with Lisa Alzo and Disaster Proofing Your Research with Sara Cochran. There was a lot of buzz about all three classes.

The evening closed with a “Meet and Greet” taco bar at the Gleneagle Golf Course. What a great way to see old friends and make new ones.

Tomorrow we’ll be treated to three DNA-related plenary sessions with Angie Bush and “Making the Most from Your Public Library” with Jennifer Foreman. In addition to Angie’s and Jennifer’s presentations, we’ll also have to choose just two classes from the ten offered — everything from death, dying and burial customs to finding ancestors without the 1890 census. In combing through the 170-page syllabus, I’m not sure how I’ll be able to choose!

If you aren’t one of the 250+ people who have already registered for the conference, don’t despair! You can register at the door for one day, two days or all three! You can’t register online anymore (and meals are not available for on-site registrants), but show up at the door and the uber-efficient volunteers from conference host Stillaguamish Valley Genealogical Society will get you set up. Just show up early! Doors open at the Byrnes Performing Arts Center at 7:30 a.m. 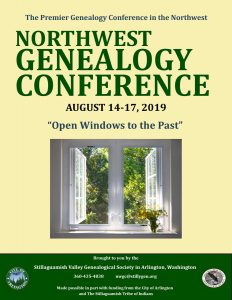 There is only a week before the Northwest Genealogy Conference, August 14-17 in Arlington, WA.

If you’re still thinking about whether to attend or not, consider these benefits and offerings:

Don’t miss this opportunity. Sign up today by clicking here.

Sign up for one of the best bargains of the summer! A FREE Beginning Genealogy day with Janet Camarata on August 14th at the Northwest Genealogy Conference in Arlington. Sign up here.

Don’t consider yourself a beginner? Good for you, but I can attest that I learn (or relearn!) something in every workshop I attend. So, sign up for this great opportunity whether you’re a beginner or intermediate or advanced researcher!

Have you noticed the Blog banner changes every time you visit? The photos are submitted by readers like you — and Sue Schack Jensen, Library Director at the Seattle Genealogical Society. Sue recently sent us three beautiful scenic photos of Picnic Point on the Puget Sound near Edmonds.

We’re always looking for scenic photos of our beautiful state for the rotating photo gallery on the blog banner. It’s easy — just send a Washington State jpg image to wsgsblog@wasgs.org with a description of the photo. The blog masters will take care of the rest!

Great news! After a year of restoration and reorganization, the Grays Harbor Genealogical Society Research Library is open for business on Tuesdays, Thursdays and Saturdays from 11:00 a.m. – 3:00 p.m. at the Hoquiam Library, 420 7th Street, Hoquiam.

The society’s research library was destroyed by a three-alarm fire that destroyed the Aberdeen Armory on 09 Jun 2018. The fire also destroyed much of the Aberdeen Museum of History, Coastal Community Action Program and the Aberdeen Senior Center. The cause of the fire was never determined.

The losses were catastrophic to the small society which had been housed at the location since 2003. Staffed completely by volunteers, the research library lost:

Thanks to the generous donations from fellow genealogical societies and individuals, Grays Harbor Gen Soc was able to purchase signage, a photocopier/scanner, computers, shelving, binders, pencils, and furniture. They were also able to find a temporary space, compliments of the Hoquiam Library.

GHGS is still very much on the lookout for Grays Harbor-related materials like old city directories, telephone books, school yearbooks, family histories, obituaries, etc. If you have materials related specifically to Grays Harbor or Chehalis Counties, they’d love to hear from you at Info@GraysHarborGenealogy.com.

There are still a few openings in the advanced workshops at next month’s Northwest Genealogy Conference. There was a little hiccup at the beginning of the registration period, but everything’s working fine now, so jump on this opportunity.

The Northwest Genealogy Conference is August 14 – 17, 2019 at the Byrnes Performing Arts Center in Arlington, Washington.

Have you noticed the banner at the top of the page changes every time you visit the Blog? The photos are submitted by readers like you. I just posted a photo of a field of baled hay that I snapped while driving near Brady, just a little east of Montesano.

We’re always looking for scenic photos of our beautiful state for the rotating photo gallery on the blog banner. It’s easy — just send a Washington State jpg image to wsgsblog@wasgs.org with a description of the photo. The blog masters will take care of the rest!

When the Prussian Princess Sophie of Anhalt-Zerbst deposed (and possibly murdered) her husband, the Russian Emperor Peter III, she became Empress Catherine the Great. Catherine ruled from 1762 to 1796. She ushered in a golden age for the empire. She had herself inoculated against smallpox and her advocacy and example saved millions of lives. She expanded the Russian empire into Poland in the west, and into Alaska in the east. And to shore up her western border, she invited German peasants to settle along the Volga River.

By paying their way and allowing the settlers to retain their languages and cultures, she enabled 27,000 migrants to settle. For 100 years, the Volga Germans prospered and made good use of die Kaisarina Katarina’s gift of land. Dick Scheuerman grew up in eastern Washington listening to his elder tell the tales of the “historic trek” from Germany to Russia—and the great betrayal that forced the descendants of those settlers to embark on another great trek.

By 1871, the Russian Senate had reneged on the deal that brought the settlers to the banks of the Volga. Faced with poverty, and being drafted into the Russian army, some 100,000 Volga Germans immigrated to North America.

As Scheuerman points out, place names throughout the Pacific Northwest reveal their Russian origins. Moscow, Idaho, and Odessa, Washington, “and smaller rural hamlets like Tiflis and Batum” are part of the story of a great Russian-German immigration to the United States in the late nineteenth century.

In 1881, the first wave of Volga Germans traveled from Kansas to San Francisco by rail, and then on to Portland by steamship. The following year, some families crossed the Cascades “by wagon…to establish homes in eastern Washington Territory’s fertile Palouse Country.”

Some immigrants came to Ritzville, an area around the Big Bend of the Columbia River. The land there had been thought to be uncultivable, but Phillip Ritz, a few others, and the new immigrants proved that wrong. “The loam was dark and rich in the area, but without lumber they had to live in sod houses or dugouts and use sagebrush and cow dung for fuel. Through efficient methods of tillage and fallowing, the industrious farmers achieved remarkable success.” Soon, the new farmers were “a distinctive island in the semi-arid pioneer landscapes of Adams County.”

The immigrants brought seed with them, hardy wheat varieties like Saxonia and Turkey Red. They brought names, too, like Weyerhaeuser and others that still figure prominently in Northwest culture and economics. And they brought stories, which Scheuerman and his wife, Lois, have been collecting since the 1970s.

The stories the kolonisty brought with them, and that the Scheuermans preserve here, tell of ties to the great czarina, a gift of a blue teapot that saved lives, and a moving story about a family, pushed by discrimination out of their Volga River home, who relocate to the American West. Respectful of the Native American families living nearby, they made a new home in the hills of the Palouse.

Hardship to Homeland is a fascinating read. First published in 1980, and revised and expanded for this new 2018 edition, the book is not only a detailed history of one of the largest ethnic migrations in the history of the United States, it is also a valuable resource for folklorists, as the authors painstakingly collected numerous stories handed down within Volga German families. It is also a testament to the value immigrants bring in terms of new political, religious, and social ideas, as well as economically important innovations now ingrained in Pacific Northwest farming and forestry methods.