** Was Your Ancestor a German Redemptioner?

From the book, Seven Years in Tibet, by Heinrich Harrer, who lived in Tibet in the 1940s and 1950s and wrote his famous book in 1982. And was turned into a great movie with Brad Pitt!  I learned so much about the Tibetan people from enjoying this book and could have copied out endless bits for you but will settle on this one….just in case you might have Tibetan ancestors: 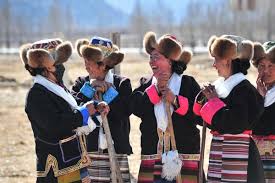 “(Now spring had come). The season of sandstorms was over, and the peach trees were in blossom. On the neighboring peaks, the last remnants of the snow shone blindly white in the warm sunshine. One day the summer season was officially declared to have begun, and the summer clothes might be worn. One had no right to leave off one’s furs when one wanted to. Every year, after considerations of the omens, a day was fixed on which the notables and monks put on summer dress. The weather might have been very warm or snowstorms might follow. That did not matter. Summer dress must be work from that date only. The same thing happens in autumn, when winter dress is officially resumed. I continually used to hear complaints that the changeover had come too coon or too late and that people were stifling hot or half frozen.”

This next was penned by Janet Margolis Damm, member of the Whitman County Genealogical Society (which is 75 miles south of Spokane). She wrote and submitted this bit to her society’s newsletter and I share it with you with her permission.

Why you will not find your ancestors headstones! By Janet Margolis Damm

If you have ever been to France or Germany or many other countries in Europe looking for your ancestor’s gravesites, you probably couldn’t find any headstone. I visited cemeteries in Germany in the early 2000s looking for my ancestors and could not find stones with a death date before the 1960’s. At the time no one told me about the charnel house tradition. I didn’t even know what the word charnel meant. A few months ago I found out and I am passing this knowledge on to you.

Charnel House, Beinhaus, bone house or ossuary are all names for the same thing. A charnel house is a vault or building where human skeletal remains are stored. They are often built near churches for depositing bones that are unearthed while digging graves. In countries where ground suitable for burial was scarce, corpses would be interred for approximately five years following death, thereby allowing decomposition to occur. Germany interred remains for 30 years. After this, the remains would be exhumed and moved to an ossuary or charnel house, thereby allowing the original burial place to be reused.

Donna:  You want some most interesting browsing and then reading? Google the term ossuary German and you’ll get an afternoon’s worth of reading hits.

Having recently visited Egypt, and having done a few minutes with Google on the topic, I wondered further about Egyptian genealogy and ANY country that has not kept records. At least not records like we are spoiled and used to here in the western world. I did find:

So I would be inclined to conclude that yes, Mr. Big .Com Companies, there may be a market for your products and services in such countries, and certainly many there are just as interested in finding out about their family’s history as we are, but to my limited knowledge, there are just no records. So sad.

What were German redemptioners?  These were German immigrants “selling” themselves into servitude for a term of years as payment for passage across the Atlantic. This is not like slavery, which was for life. Poor folks used this method. The ships’ captain got money for hauling the passengers across the ocean when he offered them for redemption in the arrival port. Families were not always “sold” together.  “These emigrants have come (to America) under special engatgement to redeem the expense of their passage by voluntary servitude.”  (Newspaper, Louisiana Gazette, 14 Mar 1818.)

For more information, I Googled redemptioner and found this excellent article… click to it yourself to read the entire bit.