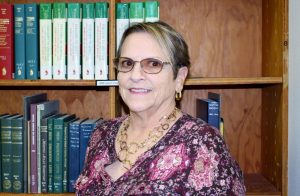 In today’s “Meet the Board” series, we’re introducing you to Patricia Olsen, known to all of us as Patty. Patty is from Chehalis in Lewis County, a proud member of the Lewis County Genealogical Society where she has served as education chair for the last five years. She is WSGS’s Region 4 Representative for Clark, Cowlitz, Lewis, Pacific, Skamania and Wahkiakum Counties. She is also a member of the Cherokee Nation, Friends of the Vann House, Trail of Tears Association, and the Cherokee Historical Society. 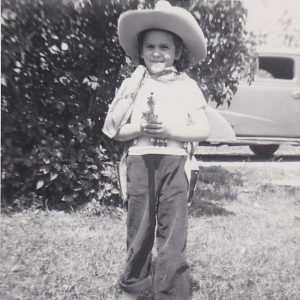 Patty at her Aunt Marcy’s house near the Birdsview Fish Hatchery, Birdsview, WA (Skagit County). Circa 1952.

Patricia Rae Lund was born on February 9 in Bellingham, Washington to Eugene “Bill” Russell and Violet Elsie (Dickinson) Lund.  Although born in the local hospital, she initially slept in a wooden apple box as there weren’t enough baby beds at the time.

Patty is extremely proud of her rich ancestry, a true slice of American history and heritage. Her mother, Violet Dickinson, was born in Bonesteel, South Dakota in 1922, the second of four children to Clarence LeRoy and Elsie Belle (Chambers) Dickinson. Grandma Elsie died in 1927, leaving Patty’s grandfather with four children under the age of six. Grandpa soon remarried Ethel Marie Joy, a neighbor of his brother’s who had been hired to watch the children while Grandpa worked. She and Grandpa married in 1928 and had seven more children – making a houseful of 11 children! There was never a reference to “step children” – they were all just one (really big) family.

Patty’s father, Eugene Russell Lund, was born in Morris, Oklahoma to John Daniel and Martha Elizabeth (Vann) Lund. Grandma Martha died in June 1922 following the birth of her fourth child in December 1921, having never recovered after the birth. Martha’s grandmother (Patty’s 2x great grandmother) Caroline “Carrie” Elizabeth Sixkiller (1853 – 1906)  was the proud daughter of Redbird “Tah-chu-wha Su-da-la-dee-hee” Sixkiller (1807 – 1898), a member of the Cherokee Tribe as  recorded in the 1863 Dawes Rolls that recognized all Cherokees living on the reservation in Oklahoma. 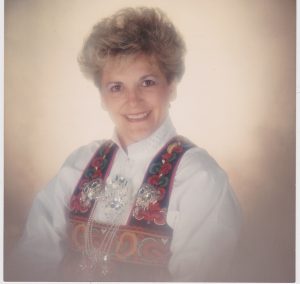 Through her genealogical research, Patty knew she was related to President Abraham Lincoln and Will Rogers, but her tribal heritage was a surprise to her. As was common in bygone days, having tribal blood was not something to be touted or even disclosed. It wasn’t until 1962 that Patty’s father was encouraged by his aunt to join the Cherokee Nation. Patty is now a proud member of the Cherokee Nation and feels a special affinity to her heritage having traveled to Oklahoma and South Dakota where her ancestors lived.

As a teenager, Patty attended a small high school with under 300 students. While there, she played the flute (first chair!) in the Concert Band which held the distinguished honor of 25 years of A+ ratings at the annual Music Educators Band Contest in Bellingham, WA. Patty’s hard work, perseverance and talent were rewarded when she was chosen as First Chair of America as a flautist in 1962. She was also selected as one of the nation’s “Outstanding Young Women in America” in 1979.

Patty has two sons, seven grandchildren and even has a great-granddaughter. She is retired from the Napavine School District, where she developed the HOSTS (Helping One Student to Succeed) program, tutoring students to help them catch up and surpass their classmates in math, reading, writing or other skill sets where they needed an extra boost. She also chaired the popular RIF Program (Reading Is Fundamental), buying and distributing books to elementary school children.

Now you know a little more about another of the WSGS Board members. The next time you see Patty, say hello and thank her for her service to WSGS.