Centralia has a most unusual founding story. A black man, George Washington, born a slave in 1817 in Virginia, is given the credit for founding of Centralia. This Lewis County town claims the distinction of being the only town in the west founded by a person of color. George’s story was highlighted in 2017, the 200th anniversary of his birth and when he was remembered as a leading African American pioneer in the Pacific Northwest. 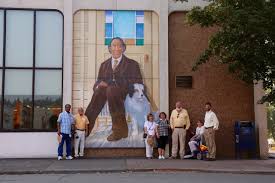 George was born to a white English woman but his father was a slave that was sold away when George was an infant. His mother, wanting her child to be free, gave him to her friends, James and Anna Cochran, to raise. The Cochrans were good, honorable people, and took George with them as they migrated to Ohio and then Missouri. There, in 1843, George became a “free and legal citizen” of Missouri by a special act of the Missouri legislature. Even with this document, fearing he might lose his freedom after the passage of the Compromise of 1850, George and the Cochrans took the famous trail to Oregon. Once there, and even then, he could not establish a land claim for himself when the family settled near the confluence of the Chehalis and Skookumchuck rivers and the Cochrans claimed land in 1852. When Washington Territory was split from Oregon Territory in 1853, the new territory’s laws did not preclude Negroes from owning land and the Cochrans sold their land to him. George cared for his adoptive parents the rest of their lives.

Anticipating the arrival of the Northern Pacific railroad in 1872, George platted the city of Centerville (now Centralia) on his land, naming the streets after Biblical references and setting aside land for a park and churches of many denominations. Centerville/Centralia was incorporated in 1886.

Despite facing some racial prejudice at the hands of newcomers…many of whom migrated from the segregated post-Civil War south), George supported the town in all ways clear until his death in 1905.

It is right and fitting that Lewis County, and certainly Centralia, celebrated George Washington, the founder of their town.

References:  Patty Olsen, who lives in Centralia, first shared news of this story with me and sent me several copied references. Thanks, Patty!

One comment on “George Washington in Centralia….did you know?”