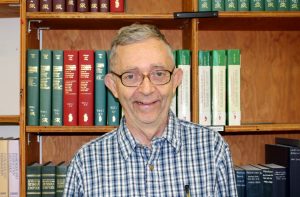 In our new “Meet the Board” series, we’re introducing you to Charles Hansen from Spokane. Charles is WSGS’s Blog Master, as well as chair of the Resource Guide Project. He is a longtime member of the Eastern Washington Genealogical Society where he serves as their Registered Agent, email chair, chief researcher (since 1998), head of library volunteers and one of their bloggers.

We know him as Charles, but he was born Charles Michael Hansen and called “Mike” by his family for as long as he can remember – probably to avoid confusion with his maternal grandfather Charles Rupert Kelly after whom he was named. His middle name honored his paternal grandfather Anton Mikkel Hansen.

Born in Spokane, Charles graduated from Washington State University in Pullman in 1971. For many years, he’s been an “Enrolled Agent,” someone considered by the IRS to be the equivalent of a CPA – able to do examinations, collections and appeals. In case you were wondering, the name Enrolled Agent came about soon after the Civil War when Enrolled Agents were authorized by the government to fill out paperwork for the veterans and families of the veterans for benefits provided by the government.

Charles became interested in genealogy back in 1990 after he and his sister Jacque decided to hold a family reunion. They started looking for their Hansen relatives – not an easy task considering that Charles and Jacque have more than 100 second cousins! After corresponding with their Dad’s first cousin Lorraine Erickson, a Family History Center volunteer in Arizona, Lorraine sent them a group sheet — something Charles and Jacque had never seen before! Lorraine suggested they send blank group sheets with the reunion packets.  Imagine their surprise when they got 350 family group sheets back! They dutifully typed the information into a program called the “Enhanced Family Tree” and printed a book for everyone that came to the reunion.

That started the ball rolling. Wanting to find out more about their family, they took a beginning genealogical course through the local community college taught by Donna Potter-Phillips, past president of the Eastern Washington Genealogical Society — and WSGS Vice President. She encouraged Charles and Jacque to join EWGS and the rest is, well…history.

A tip from Charles: I didn’t record who sent me each group sheet, so for the first 500 names in my genealogical file today most have no sources, but I do have the hard copy group sheets. Also the Enhanced Family Tree program did not have the ability to save data as a GEDCOM so when I switched to a better program, I had to retype all the data I had.

When Charles isn’t blogging on the WSGS Blog (or his own blog http://charles-mikkelshus.blogspot.com/), researching at the county courthouse, volunteering at EWGS or doing his own genealogy, he’s out in his garden puttering here and there.

Now you know a little more about one of the WSGS Board members. The next time you see Charles, say hello and thank him for his service to the WSGS.