The Washington State Genealogical Society is asking its members and blog readers to support the state’s Digital Archives in October. We are unbelievably lucky in this state to have a resource like the Digital Archives. What a wealth of information, including historic photographs, BDM records, cemetery directories, maps and land records — many from pre-statehood. All access, all free. Transcribed and indexed by volunteers like you! Click here to join the army of volunteers.

Steven Baylor started indexing before there was a Scribe (the super easy online transcription application used to transcribe records).  Since official counting began, he has transcribed almost 150,000 records — and growing every day as it’s something he works into his daily schedule. Whenever he has a half hour here or a couple hours there, he sits down and indexes a dozen or so documents.  According to Steve who is a former President of WSGS and member of the Stillaguamish Valley Genealogical Society:

“It’s all part of paying it forward.  My research has been made easier by others who have spent hours indexing and I’m pleased I can do my part to increase accessibility of public records. Now that my wife has Alzheimer’s, I need to be at home most every day.  Indexing is something I can do and still feel like I am contributing to the genealogical community without having to travel anywhere.

Steve started indexing many years ago when he and other WSGS members worked with the Secretary of State’s office to index the 1910 Federal Census of Washington. After that labor-intensive undertaking, the Archives Office began using a “hybrid” system where they would mail paper copies of documents to transcribers who would index them online or on a disk and mail the paper copies back to Olympia.  Steve’s wife assisted him by reading names to him while he typed, then she would double-check the finished product before they clicked the send button. Great teamwork! 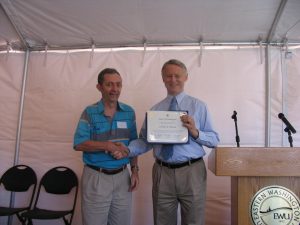 Charles being recognized for his accomplishments by former Secretary of State Sam Reed.

Charles Hansen started in 2003 when the Digital Archives was being built near the Eastern Washington University campus in Cheney (Charles lives in Spokane).  State officials began asking local genealogical societies to donate records to put in the infant digital archives. Charles had some DOS databases (remember DOS????) for early Spokane County births, deaths and marriages. He also had indexed the 1887 Spokane County Census. He generously gave those electronic records to start the digital archives. Shortly thereafter, Archives officials asked for volunteers to help index and volunteer at the archives, so he started indexing — being sent paper copies of the records and a floppy disk with the format to index.

The next transcription and index improvement was Scribe — the online digital application that allows users to become “honorary archivists” of the state’s historically important records. By using Scribe, volunteers are able to add information to the images, making them searchable online. It’s easy to use — just fill in the blanks and save the data. Each record can be viewed by many transcribers, but two transcriptions must match exactly before the record can become searchable.

Charles, a member of the Eastern Washington Genealogical Society and WSGS’s Blog Master, has indexed 151,240 records since record counts have begun.

But you don’t have to be a super star like Steve or Charles to make a difference! Any record transcribed or indexed is a record available to the public. To date, I’ve transcribed nine records (yes, 9!), but I’m committed to making these records available for public access. Help me!