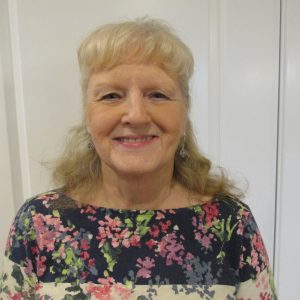 In today’s “Meet the Board” series, we’re introducing you to Barbara Jeanne Gorham Johnson. Barb lives in Mount Vernon (Skagit County) and is in her first term as WSGS’s Region 1 South Representative. Besides being a member of WSGS, she is a long-time member of the Skagit Valley Genealogical Society where she has served on the Board as secretary, vice president, and currently as education chair and communications chair. She also belongs to Clan Johnstone in America and Saddleworth (Yorkshire) Historical Society.

Barbara Jean was born in Seattle in 1943, the daughter of Arthur and Emily (Kochis) Gorham. Her mother, the good Catholic that she was, named her daughter after St. Barbara and St. John. Her names mean “stranger” and “God/like/ly.” With a twinkle in her eye, Barb’s mother told her daughter that she was a “strange gift from God.” What a sense of humor! 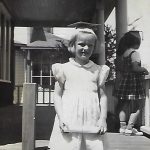 While born in Seattle, Barb grew up on the idyllic Vashon Island. After high school, she earned her Bachelor’s Degree in Microbiology at the University of Washington and did virus research for several years. After marrying Roger Johnson, she became a full-time mom. After that, she became a King County police officer, then did security duty at Bellevue Square. After that, she became the first park ranger for the City of Bellevue. She has also been a science teacher with Pacific Science Center’s “Science On Wheels” program. When she and Roger “retired” to Skagit County, she worked part-time as a park ranger for North Cascades National Park. This girl loves the great out of doors!

Barb has been interested in family history for years. She used to listen to her parents talk about their childhood years in New York City and (at that time) Czechoslovakia. Barb would often ask her  maternal grandmother to tell her about the old country, curious about her native homeland. About 25 years, ago, Barb got serious about researching her roots. She has traveled to ancestral lands in Massachusetts, Ireland, Scotland and Yorkshire, England. 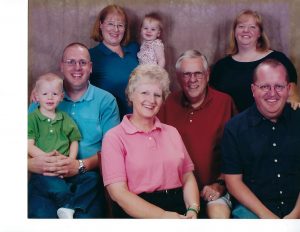 Barbara and her family

Speaking of Yorkshire, one of her most fascinating genealogical discoveries was finding her Yorkshire cousin who helped her with her research back to the 1500’s. Barb and Roger visited him in the Parish of Saddleworth in West Riding of Yorkshire last year. He was kind enough to escort them all over the parish, regaling them with stories of ancient and family history and architectural history.

Barb and Roger, a retired banker who is a model railroader, are the proud parents of Steven and Michelle. Steven is a Navy veteran now working for a defense contractor in Washington, D.C. Steven and his wife Jen, a school teacher who is also a Navy veteran, have two children: Jeffrey (age 12) and Lexie (age 9).  Daughter Michelle and her husband Bob live in Edmonds. She is an early education teacher at Edmonds Community College, while Bob is a home inspector.

Now you know a little more about another of the WSGS Board members. The next time you see Barb say hello and thank her for her service to WSGS.