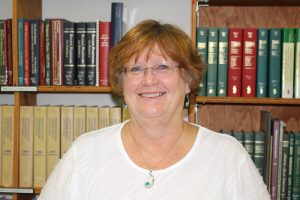 In today’s “Meet the Board” series, we’re introducing you to Virginia Majewski from Sequim. Virginia, more familiarly known to us as Ginny, is WSGS’s new President, having been elected last month. Her dedication to WSGS is longstanding as she has previously served as WSGS’s Secretary, Region 3 Representative and Vice President.

Virginia Ann was born in Yakima to Wesley Roy and Nancy Jane (Grabill) Forney. She is a proud 4th generation Washingtonian and descendant of a Washington State Pioneer family. Ginny’s name was handed down through her mother’s family – great grandmother, great aunts and aunts – even though Ginny’s dad maintains he picked out her name.

Ginny is a graduate of Quincy High School in Quincy, Washington (Grant County) and Sacred Heart School of Nursing in Spokane. She is married to her husband of 30 years, Moe. She is the mother of four grown children and, most importantly, grandmother of eight, ages 17-1. She retired from her career of 42 years as an Obstetrical Nurse in 2013.

Ginny has been involved in genealogy for more than 20 years. It all started with a couple of boxes of “junk” from her grandparent’s estate. She was bitten by the genealogy bug and it became one of her life’s passions. Her maternal and paternal lines go back to exiled Mennonites in Switzerland. In 2000, she took a three-week genealogical tour of Switzerland, Germany, France, Belgium and the Netherlands – following the path of her exiled ancestors.

When asked what she finds most interesting about genealogy, Ginny muses about a bigamist, unknown illegitimate cousins, a civil war hero and many more interesting characters!

Now you know a little more about one of the WSGS Board members. The next time you see Ginny, say hello and thank her for her service to the WSGS.

2 comments on “Meet the Board: Virginia Majewski”