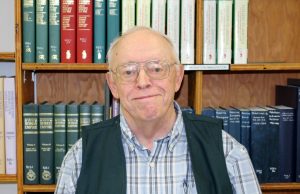 In today’s “Meet the Board” series, we’re introducing you to Patrick Bundy. Pat lives in Yakima and is WSGS’s Historian, a position he’s held for more than a few years. He is also a 30-plus-year member of the Yakima Valley Genealogical Society where he has been president for the last two years. Over the years, he’s also been YVGS’s vice president, program chair, publicity chair, recording secretary and on the library board. He has been a member of the WSGS since 1988 and was named a WSGS Outstanding Volunteer in 2014 for his leadership, knowledge, and volunteer efforts at YVGS.

In the beginning…Earl and Elsie (Deans) Bundy’s firstborn son, Patrick James, made his appearance in 1944 in Minnesota. His next big accomplishment was marrying his sweetheart Lynn Helmick in 1973 in Yakima. Sadly, Lynn passed away in 2014, leaving Pat, five children and many cherished grandchildren that Pat continues to dote on.

After getting his education at Yakima Valley Community College, Pat was employed in the TV and radio biz in Yakima. Although he’s always been interested in genealogy, after his retirement, Pat really ramped it up, searching for his Mid-West and New York ancestors. One of his most interesting finds: his 3x great-grandfather, a Lutheran minister, built the first Lutheran Church in Ontario, Canada.

Pat knows his way around the kitchen and enjoys cooking when he’s not searching for his ancestors – or engaging in social media. It’s not uncommon to wake up to his cheery Facebook message:

Now you know a little more about another of the WSGS Board members. The next time you see Pat say hello and thank him for his service to WSGS.